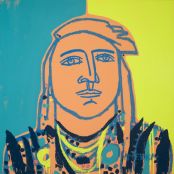 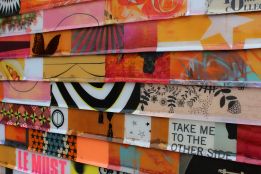 Our booth will be a collaborative effort in bringing the abstract and figurative arts together while showcasing the artistic influences of pop culture. Colombian American artist America Martin’s bold lines and vibrant color palette found within her Native American series are reflective of Andy Warhol. The Native American paintings were inspired by her visit to the enormous Pow-Wow in Taos, New Mexico.  The series portrays a visual story of the people who come together to celebrate, to commemorate and to remember. Belgian Artist Anja Van Herle's figurative paintings are inspired by both classic and contemporary fashion while exploring issues of identity, emotion and human interrelationships.

James Verbicky’s striking multimedia works defy easy description, deftly combining elements of collage with layers of resin and dye to form panels that burst with color and texture. Verbicky’s appropriation of vintage advertising imagery invites viewers to contemplate a culture of media bombardment, while his masterful sense of proportion and color stimulate the senses. Jana' Cruder's work reflects a current examination of pop culture’s take on femininity, grounded within the 50's and 60's.  Jana's photographic storytelling showcases her unique voice and personal interpretations of female iconography; who doesn't love Barbie!

Figurative artist Pedro Bonnin approaches his subjects in a highly skillful, photorealistic manner. Bonnin is remarkable for his deft handling of oil paint, but what further distinguishes him is his rare ability to create moods. His darkly comic figures frequently border on the absurd. Robert Mars’ artwork chronicles an evolving fascination with the Golden Age of American popular culture celebrating the icons of the 1950’s and 60’s by taking inspiration from this culture long past. By using symbols from mass media culture –whether the flag, classic film stars, or logos of popular brands – Mars both critiques our culture’s fascination with celebrity and consumerism, while indulging his own nostalgia for America’s golden age of advertising. Deeply influenced by Pop Art, Mars appropriates vintage ephemera into striking new forms that invite the viewer to question their own relationship to these symbols.

The Pacific Northwest duo Stallman, Stephen Stum and Jason Hallman, partners in art and life, are pioneering an innovative technique using canvas and paint as sculpture, taking a traditional medium and turning it on its head giving canvas the leading role. They sculpt in separate locations within the piece simultaneously, then switch places and respond to each other’s movements creating a dynamic dialog within the composition. This union of minds dissolves the boundaries of possibility turning the ordinary into the extraordinary. We feel this is a strong representation of contemporary works by a varied group of artists...that go "POP".

These artists will inspire, provoke, engage and mesmerize. With visual perceptions always changing, peek behind the stories told and you're sure to find the right artistic expression!