There are few subjects in American history that can ignite the imagination as much as the mystery, romance and mythology associated with the American Frontier. The theme of the Wild West has long been popular in American art, film, and literature. Often, the visual imagery is heavily tied in with the folklore that has been created around the Wild West and Native American tradition. Artists Billy Schenck, Greg Miller and America Martin all have their own particular ties to the vast landscape and history of the region that was once considered the Frontier. In their recent bodies of work, each artist independently explores this history through imagery sourced from both personal narrative as well as popular culture. JoAnne Artman Gallery is proud to present The Wild Bunch, an exhibition of recent works by Schenck, Miller and Martin, in which the artists undertake topics ranging from individual agency to remembered history through the lens of each unique process.

Billy Schenck utilizes specific frames of reference in his oil on canvas depictions of the American West, establishing visual links between notable moments of American and film history, along with the history of visual modes of production.  Stark contrasts, use of pattern, vivid hues, and a pop sensibility imbibe the work with a contemporary edge, while taking on some of the most popular tropes of Hollywood’s film industry. Frequent motifs in Schenck’s work include heroes, villains, the seductive femme fatale, as well as alluring imagery of Native American figures, frequently juxtaposed with subversive text or a winking acquiescence via visual symbols or motifs. Schenck sources his imagery from both personal references as well as historical sources such as newspapers and other print media tying his personal narratives to those that came before.

Greg Miller’s mixed media approach ties together the history of Pop Art, the processes of collage and assemblage as well as the concepts of urban decay and collective memory. Utilizing collected paper ephemera, Miller draws on his urban Californian roots to create tangible, evocative, visual narratives across his compositions through both image and text, with moments of poetic juxtaposition and historical allusion. Often using historical texts, illustrations, newspaper and photographs as a base, Miller completes the works with elements of typography as well as the painted form resulting in visual landscapes of great narrative depth. Miller’s unique brand of Americana celebrates as well as notes our ties to iconic imagery that transcends the conventions of the passage of time.

LA-based artist America Martin draws inspiration from her Colombian heritage, the natural world, as well as the landscape of Southern California. Her work frequently features the human figure shown in relationship to nature, with animals and plants used analogously to traits of personality. Martin works in a variety of media including painting, drawing, printmaking, and sculpture, yet her unique use of line and portrayal of form is notable across medium. Luscious, generous strokes of the brush, thick layers of paint and a bold use of line are signatures of her work, with much attention paid to composition. Martin often treats the figure and background with equal importance. In her recent body of work, she returns to the subject of Native American portraits, mixing indigenous motifs with her signature style and featuring depictions of the human form as solid, grounded, and in tune with its environment and spirit

These artists’ work will inspire, provoke, engage and mesmerize. With visual perceptions always changing, peek behind the stories told and you're sure to find the right artistic expression 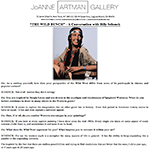 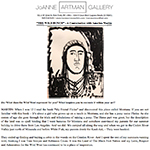